Size
To 4 Kg usually up to 1 Kg.  Bass have very variable growth rates depending upon available food.

Habitat
Often found far upstream in freshwater.  Prefers cover such as instream debris, fallen timber or rocky outcrops.  May be found in all types of water from still pools to fast running streams. 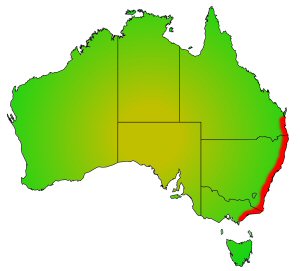 Coastal rivers and streams along the Eastern seaboard from Tin Can Bay in Queensland, south through New South Wales and into eastern Victoria.  Not recorded west of Wilson's Promontory.

Most prolific in the waters of remote streams in the far south coast of New South Wales and eastern Gippsland in Victoria.

History
Numbers are much reduced throughout much of its range and bass have been severely effected by the regulation of many of the rivers in its range.  In particular dams and weirs prevent breeding related up and downstream migration of bass resulting in land-locked populations unable to spawn and much smaller populations below the obstructions due to limited habitat.

Bass have recently been successfully bred commercially and re-stocking of a number of land locked populations has taken place as well as extensive stocking of inland dams and reservoirs for recreational fishing.  The stocking of bass for recreational purposes has been a great success.  From the fisheries management point of view, bass's inability to breed in such land locked lakes gives fishery departments the ability to control the fish without concerns that they will establish wild populations .

In the 1990s, fisheries research vessels captured a number of Australian bass at sea, several kilometers off shore and this led to the theory, then backed up by initial genetic work, that bass may share a common gene pool, rather than being different in separate river catchments.  However, more recent genetic studies indicate that there remains significant genetic diversity between populations of bass in geographically displaced areas.  So while bass in neighbouring catchments may share a common or very similar genetic strain, fish from further away are more genetically diverse.  For this reason NFA strongly recommends that all stockings of Australian bass be made using fish bred from brood stock sourced from the target system, wherever possible.

Reproduction
Bass start to migrate into estuaries to breed in mid to late Winter, starting first with the northern populations and finishing with the Victorian populations.  Unusually cold or dry weather may cause a delay in this migrations and some years it appears that the more mature fish do not migrate at all.

Once in the salty water the males congregate in large schools of several hundred fish.  Females are not found in such large groups.  Females may produce several hundred thousand eggs which are small (about 1 mm when water hardened), non-adhesive and free floating.

Newly hatched larvae are quite small, around 2.5 mm, and start to feed when about three days old.  After around a month and a half, the fry begin to school up, although the schools appear to break up during feeding.  Pigmentation develops at around three months of age when the fish are about 20 mm in length.

After a currently unknown amount of time in the estuary, the juvenile fish begin to migrate up into the fresh water.  Juvenile bass between 25 and 50 mm in length have been found in freshwater at the end of November.

Diet
Australian bass have a varied diet including insects from the water's surface, and other organisms from the entire water column and the bottom including aquatic insects, shrimps and other freshwater crustacea, tadpoles and small fish.  In salt water they feed on various crustaceans including prawns and small crabs, worms and fish.

Angling
One of Australia's most truly outstanding freshwater sports fish, bass respond to all methods of angling.  Australian bass are the native fisherman's answer to trout.  Bass will respond to angling methods used by trout fishermen and will easily outfight trout of a similar size, as well as being better adapted to Australian conditions (funny about that...).  This species is now becoming extremely popular amongst the angling community especially in inland dams where it is stocked by fishery departments and local angling groups.

Native Fish Australia stongly encourages the use of only catch and release fishing when targeting bass in its native streams.  In stocked dams, however, bass fishing for the table within the legal bag and size limits is supported and encouraged.

Most bass specialist use small to medium sized cast floating lures, although trolling is effective at times.  Surface lures are especially effective on bass, although a degree of finesse is usually required.  With all lures, when fishing for bass, it is usually best to allow the lure to float on the surface for some time before beginning the retrieve.  Occasionally pausing during the retrieve is also often effective.

On the other hand, one NFA member, fishing the Border Bass Challenge had a small bass chase a surface lure all the way across a pool, repeatedly striking at it but not connecting until finally he stopped retrieving the lure right at his feet, whereupon the fish swallowed the lure!

Fly is effective in many areas, but the best natural bass waters are often heavily over grown and a degree of skill is required if one is not to become hopelessly tangled in the overhanging vegetation.

In many waters, especially those nearest to population areas, bass can be easily spooked so subdued clothing is the order of the day and great care must be taken to be quiet.

Many bass fishermen use, depending upon the size of the water, either a "pointy punt" with an electric motor or a canoe when fishing for bass.  Both of these options allow for the quiet approach needed when fishing for wily bass.

Bass are great fun to catch and often hit hard and fight hard, they are very strong and a fast fish through the water.  Any angler's first large bass will be remembered for a lifetime.

Some of the best bass fishing to be had anywhere is in the remote areas near the New South Wales/Victorian border.  Fishing these areas often requires a serious amount of walking through rugged bushland in narrow steep valleys or canoe trips of several days duration and is not for the faint hearted.  The effort is worth it, though, in finding wonderful clear unspoilt streams and pools surrounded by the most spectacular scenery not to mention the most ferocious monster bass!

On the table
Good eating, bass can be cooked in a variety of ways.  Gently grilling or pan frying provides excellent results.

In the aquarium
A very attractive often bronze coloured fish, bass adapt very quickly and well to life in the aquarium.  However, like many larger fish, individual bass should be kept in tanks of their own.

Can be trained to take fish strips from the hand, but their diet should be supplemented with live food like insects such as beetles and moths, earthworms (particularly scrub worms), and when available freshwater shrimp and small yabbies.

These fish become very interactive with their carer and make great aquarium specimens.  Bass will do best in a medium to large sized tank and are also ideally suited to large ponds and farm dams.