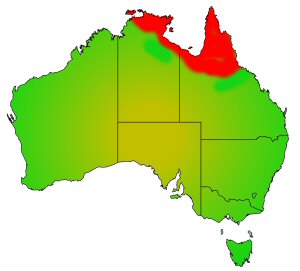 Arius berneyi is known to inhabit coastal rivers and streams in the Gulf of Carpentaria and northern areas of the Northern Territory as far west as the Mary River system.

Reproduction
The life history of this fish is not well known.  It is assumed that like other members of the group it is a mouth brooder, and that the eggs would be incubated by the male.  There is some evidence that these fish will spawn in fresh water.

Angling
Not usually considered to be an angling target.

On the table
Not considered a table fish.

In the aquarium
Not well known as an aquarium fish, but other members of this group can make excellent aquarium specimens, so there is no reason to think that these fish would be otherwise.  In any case, this species smaller size than some other members of the group should make it a more satisfactory subject.