Other Common Names
None.
Previously Victorian Smelt was recognised as a separate species R.victoria but it is now considered a synonym of R.semoni.

Conservation Status
Widespread and abundant throughout its range, not threatened.

Habitat
A pelagic species found in great numbers often in schools of several thousand individuals.  Prefers slow moving or still water, it is often found billabongs, dams, and lakes, both freshwater and saline, as well as slower sections rivers and streams.  Completes its entire life cycle in freshwater although there have been some unconfirmed reports of diadromous populations. 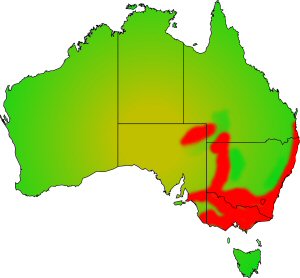 A wide-spread species throughout the south-east of the Australian continent.  Occurs in coastal drainages down the eastern seaboard from about the Fitzroy River in Queensland to the south-east corner of South Australia.  Occurs extensively in tributaries in the southern part of the Murray-Darling system including the Darling downstream from around Wilcannia and a number of smaller disconnected river and creek systems in the north-western part of New South Wales extending into south western Queensland.  Also found in the Coopers Creek system which drains into Lake Eyre.

Reproduction
Spawns in the springtime, when water temperatures have exceeded 15°C. The spherical, transparent eggs are adhesive and around 0.8 mm in diameter, expanding to around 1 mm when water hardened.  The eggs are demersal, sinking to the bottom where they stick to vegetation, bottom debris or the substrate.  Females carry between 100 to 1000 eggs.  The eggs hatch in 9 to 10 days at which time the larvae are around 4.5 to 5 mm in length.

In the aquarium
Once established in an aquarium this species can be kept without much trouble and is an attractive, small silvery fish.  Best when fed on live food such as Tubifex worms and mosquito larvae, but can be trained to dried food.  Not suitable for use in a community tank, it does best when kept in small groups in single species tanks.

When handled, especially from the wild, it often suffers from high rates of stress-induced mortality, particularly if being netted, also the scales are very easily lost and this injury reportedly often results in death.  Best handled when being transferred by using a plastic bag filled with water so that the fish are not directly handled at all.

This species is reported to be "frog friendly" and is therefore a good choice for a pond which also contains tadpoles.  An excellent mosquito predator.  Probably somewhat vulnerable to predation by birds unless provided with suitable cover such as water lilies and other aquatic vegetation.