Habitat
Inhabits a wide variety of habitats from dams, billabongs and bores to rivers and including clear and muddy waters.  With wide physiochemical tolerances, M.Mogurnda can withstand short periods of low oxygen levels, water temperatures from 5 to at least 32°C and salinities up to 10,000 parts per million. 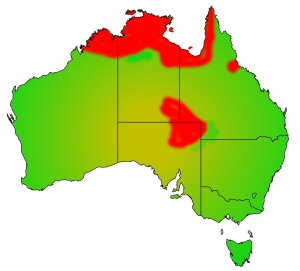 Widely distributed across Northern Australia and southern New Guinea.  In Australia, its distribution extends from Cape York, adjacent to the Gulf of Carpentria, throughout the gulf drainages, across Arnhem Land in the Northern Territory into Western Australia as far west as Fitzroy River.  Also found in the Lake Eyre drainage.

Reproduction
Sexual dimorphism is displayed during the breeding season, the male urinogenital papilla are pointed and may attain an intense blue colouration, in females the papilla are short and broad with a fringed margin.  Spawning involves the adults swimming closely together, the female deposits a patch of demersal, adhesive eggs on a hard surface such a rock or log.  Each clutch is around 50 mm in diameter and contains around 100 to 150 eggs.  During the breeding season (November to February) the female may deposit up to 10 clutches.  The male remains on guard over the eggs, fanning them with his pectoral fins to maintain a current of water until they hatch in about 9 days.

Diet
Mainly carnivorous, feeds on a variety of insects and crustaceans, molluscs, other fish, worms and some plant material.

In the aquarium
A very attractive and popular aquarium species, reasonable easily obtained though the aquarium trade.  Often mistaken for the endangered Southern Purple Spotted Gudgeon to which it is very similar.  Best maintained in a tank with adequate cover and with a water temperature between 20 to 27°C.  The fish tends to be a fairly belligerent bottom dweller and will usually take only live or fresh foods.  Suitable foods include small earthworms, brine shrimp and daphnia.

Will breed in captivity.  It has been suggested that it is best if one female is kept with several males.  Often the female deposits the eggs on the glass of the aquarium.  The female and other males should be removed after spawning and the brooding male after the eggs hatch.  If the adults are not removed, they will eat the larvae and any remaining eggs.  Larvae can be raised on newly hatched brine shrimp and small rotifers.