Habitat
Found throughout estuarine and river systems within it range.  Generally prefers lower water velocities and is often found amongst debris on the bottom of quiet pools or under snags and undercut banks.  In gravel substrates, will bury itself leaving the eyes and dorsal fin just visible as it waits in ambush.  Has a bottom dwelling life style. 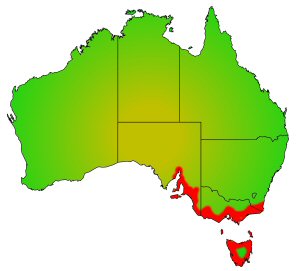 Distribution
Common in coastal streams in Victoria, Tasmania and Southern New South Wales as well as the Eastern part of South Australia

Reproduction
Adult tupong migrate into the estuaries to spawn during autumn and winter.  Larvae are carried out to sea and subsequently juvenile fish mostly remain in the downstream areas before gradually moving upstream as they grow larger.

Diet
Tupong are a generalised carnivore and eat a wide variety of benthic animals such as aquatic insects, worms, small yabbies and shrimps.

Angling
Not generally fished for due to their small size, tupong can be angled using very light tackle and small earth worms as bait.  Larger specimens can put up a good fight for a fish of their size.  Mostly, tupong are caught by anglers fishing for blackfish and are not well know amongst the angling community.

On the table
Tupong are excellent eating, but are not generally found of a size worth taking.  Larger specimens are sometimes caught in the Western districts of Victoria and these are well worth taking for the table.  Responds to simple cooking methods and should not be over cooked.

In the aquarium
An excellent aquarium fish, tupong are hardy and easily fed on earthworms, small yabbies, shrimps and aquatic insects.  They often exhibit comical behaviour at feeding time, "lying in ambush" for an earthworm then darting out to capture the prey.