Habitat
Prefers long deep muddy holes with overhanging vegetation.  Saratoga are solitary fish and are very territorial and aggressive to other members of their species.  Captured specimens often exhibit the scars of past battles. 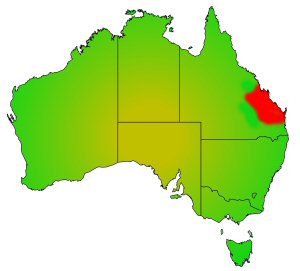 Distribution
Saratoga occur throughout the Fitzroy River system of North Eastern Queensland, although stocks have been transferred to other areas.

Reproduction
Saratoga exhibit interesting breeding behavior.  The female produces around 70 to 200 large eggs, about 10 mm in diameter.  She takes the fertilised eggs into her mouth and keeps them there until they hatch.  During this time, she loses all interest in feeding and spends more time at the surface.  Other saratoga appear to ignore the breeding females, putting aside their normal enmity towards other fish.

When the eggs hatch, about one to two weeks after fertilisation, the female periodically releases the larval fish near the edges of the pool.  She remains nearby and often swims slowly parallel to the bank with the young fish swimming about her head.  She recalls the baby fish with a sudden kinking movement of her body which is followed by the rapid return of the fry to her mouth.  This release and recall behaviour continues for the first two or three days after the eggs hatch.

Once the juvenile fish become independent of the mother at around 40 mm in length, they take up territorial positions around the edge of the pool.  Young fish unable to find or hold a territory form loose shoals.

Diet
A carnivorous fish, saratoga mainly take food from the water surface.  The bulk of their diet comprises terrestrial insects, although saratoga will take small fish, frogs, shrimps and yabbies.

Angling
A well regarded angling species, saratoga are spectacular, jumping fighters and are a favourite amongst fly fishers in the North.  Queensland minimum size 50 cm, combined possession limit for saratoga and gulf saratoga is one fish. In order to protect this ancient and wonderful fish, most anglers for saratoga use catch and release, a practice encouraged by NFA.

On the table
Not generally considered a table fish.

In the aquarium
Smaller examples make very impressive aquarium specimens, although S.leichardti can be harder to keep than the less flighty S.jardini.  The fish is a natural jumper, and any aquarium must have a suitably heavy lid, else the fish is likely to jump out of the tank.  This can be a particular problem when performing maintenance, so extra care should be taken at this time.  Should be kept only in a single fish tank due to the solitary, agressive and territorial nature of this species.