Habitat
Inhabits a wide variety of habitats in rivers creeks and mangrove estuaries in clear to turbid water.  Most common in rivers and creeks with large catchments with a slow continuous flow and water temperatures above 20°C.  Shows a distinct preference for submerged logs, rock ledges and other structure in the water.

Barramundi are a catadromous species, that is it grows to maturity in the upper reaches of freshwater rivers and streams and adults move downstream, especially during flooding, to estuaries and coastal waters for spawning. 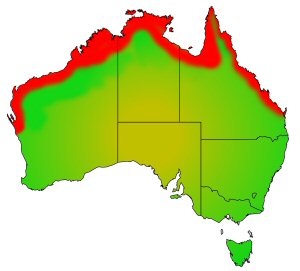 L.calcarifer has a very extensive range in tropical and semi-tropical areas of the Indo-Pacific.   Its distribution extends from the Persian Gulf to southern China and southwards to northern Australia.  Within Australia its range extends from the Mary and Maroochy River systems in south-east Queensland northwards around the entire northern coast to Shark Bay in Western Australia.

Angling
An exciting and popular target for anglers in northern Australia, Barramundi responds well to lures either cast or trolled.  Large minnow pattern lures are popular and productive when fished around snags, mangrove roots rocky outcrops, submerged timber and other heavy cover.  Bright metallic gold or bronze a particularly popular lure colours for these feisty fellows.  Often known for its spectacular leaps from the water during the fight, the Barramundi justifiably commands respect from those who seek it out.

Barramundi are also popular on heavier weight fly gear, and they will take live bait, especially mullet, prawns and macrobrachium (a giant freshwater shrimp).  Whilst some excellent specimens have been taken on dead baits, it is not generally a recommended option.

These days many Barramundi sports fishermen practice catch and release.  This practice is encouraged by NFA, although there is no reason not to take the occasional fish for the table.

On the table
Barramundi has gained a reputation as one of Australia's finest eating fish, usually with a price to match!  In fact such is the reputation that there has been the occasional scandal due to substitution of other, cheaper, fish in the restaurant trade.  Objectively it is probably true that the reputation exceeds the reality, but there is no denying that Barramundi are excellent table fish and specimens captured from estuarine waters are delicious, with firm, white, fine-grained meat.  However, fish that have spent some time, even years in turbid, muddy water in some back water can be an entirely different story and their flesh can range from very tasty to inedible.

In the aquarium
Barramundi are generally placid in the aquarium, although the feeding reflex is still violent and sudden.  They will take live or frozen bait fish, prawns and mussels.  In contrast to the wild where Barramundi appear to be mainly nocturnal feeders, in aquaria, they will readily feed in daylight and become very tame.