Size
Up to 600 mm and 5.5 kg, commonly to 300 mm, fish South of the Great Dividing range, especially in South Eastern Victoria often grow to much larger size than their northern brethren, the two spined blackfish. 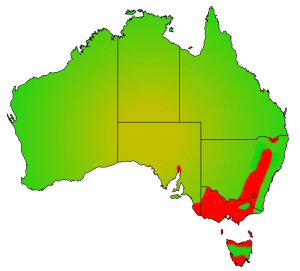 Common in rivers and streams South of the Great dividing Range in Victoria and in higher waters in the South Eastern Murray-Darling basin.  Original range extended trhoughout most of Victoria into south-eastern South Australia (the latter group possibly constituting a distinct taxonomic identity) and at elevations above 600-900 in New South Wales and souther Queensland on the western slopes of the Great Dividing Range.

Now much less common with many areas only holding remnant populations if any.  Blackfish are particularly susceptible to siltation in their preferred small upland streams due to their habitat preferences.  Common agricultural practice throughout the Murray Darling basin has consequently severely restricted the distribution of this fish.

History
The size differential between Northern and Southern fish warrants further investigation to determine whether the southern (larger fish) population actually constitute a separate species or sub-species.  Some very preliminary work done recently suggets that this may be the case.

Another outstanding issue is the question of where to place the Gadopsis genus taxanomically.  Some researchers have suggested that this genus, rather than constituting a separate family Gadopidae, should be placed in the family Percichthyidae, the family containing Murray cod amongst others.  This remains controversial, but proponents of the idea point to significant morphological and behavioural similarities between the blackfishes and Murray cod.

Like most things relating to the scientific study of Australian native fish, most of the work required to resolve these and many other issues remains to be done.

Angling
Often overlooked as an angling option, blackfish provide fine sport on light tackle.  In some areas, blackfish can reach truly prodigious size, so heavier gear is required at times.

Remember that blackfish are an ambush predator and are secretive rather than shy.  The trick is to get your bait or lure to within striking distance of the fish which is generally in heavy cover or lurking under an undercut bank.

On the table
A superb eating fish with soft white flesh, blackfish need gentle treatment when cooking for best results.  Fillets from larger fish may be poached of gently fried in a little butter.  Do not over cook.  Smaller fish are probably best cooked whole.