Size
To greater than 1m, 3Kg

Habitat
Often preferring still waters such as lakes, dams and swamps, nevertheless often quite abundant in rivers and streams, especially in areas of lower water velocity.  Found in a wide range of habitats throughout it range. 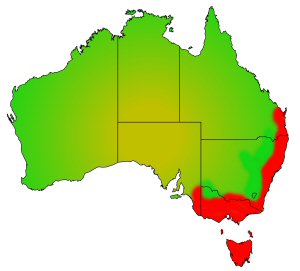 Reproduction
Short finned eels have an interesting life-cycle.  The mature adults migrate from fresh water to the sea in order to spawn after which it is believed they die.  Where they actually spawn is uncertain but is believed to be in the South Coral Sea off the coast of North Queensland.  Mature females about a metre in length have been found to contain more than 3 million eggs.

The eel larvae, known as leptocephali because of their leaf like flat shape, are carried south by the East Australian Current from their spawning grounds until they reach the continental shelf.  At around this time they metamorphose into the normal tubular eel shape although devoid of any pigment and so are known as glass eels.

When the glass eels begin to migrate into fresh water they may be anywhere from one to three years old.  Migration begins in the autumn in Northern regions reaching Western Victoria by mid spring.  Whilst in the estuarine waters the glass eels quickly develop into fully pigment elvers and adjust to fresh water.

Subsequent migrations from the estuaries into fresh water involve both elvers and glass eels and may happen after, during or before the main migration from the sea.  These migrations are know as "eel fares" from which the term "elver" is derived.  Generally these occur at night and may involve as many as four different age classes.

The upstream migration continues well into the upper reaches of the river systems and elvers and glass eels (and adults) can overcome even large obstructions such as dams and waterfalls by the simple expedient of traveling overland in damp conditions, with a motion much like snakes.

Eels can live for a long time and females may reach the age of 35 years before feeling the urge to begin the cycle all over again.  Males may live for 25 years.  However females as young as 10 and males as young 6 may begin the downstream migration to breed.

Angling
Eels readily take bait, often that intended for other species.  Can provide good fun on light tackle.  Not generally deliberately fished for by freshwater anglers and often despised for their snake like appearance and heavy slime coating.

On the table
If caught in clear water, eels provide good eating.  Generally prepared by skinning and cutting into suitable lengths.  Unlike many fish, eel is quite good if well pan fried over a moderate to high heat until the flesh begins to brown.  Smoked eel is delicious.

In the aquarium
Eels make interesting pets, but some individuals can be terrible escapologists.  Easy to feed, eels will take a wide variety of food, such as fish strips and live shrimp, yabbies and aquatic insects.