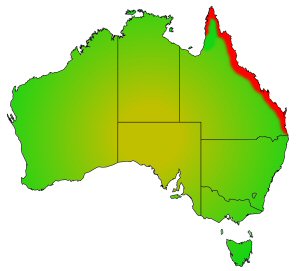 Distribution
Patchy distribution east of the Great Dividing Range in Queensland, from to the Tallebudgera Creek in southern Queensland to Cape York, as well as Palm Island off the Queensland coast and the north east corner of the Gulf of Carpentaria drainage but not elsewhere in Australia.  However, it is widespread in the Indo-Pacific from south eastern South Africa and the western Indian Ocean north to Japan and east to the Federated States of Micronesia, Samoa and Fiji..

Within its original range the jungle perch's distribution has been substantially reduced by agricultural practices.  In particular the practice of clearing right to the water's edge has severely impacted this species.  The Queensland sugar cain industry has been identified as one of the major culprits here.  Whilst details are not currently to hand, it is to be hoped that new restrictions imposed by the Queensland Government will help to alleviate this.

Reproduction
Recent research has confirmed that jungle perch migrate downstream to estuaries to spawn, in a similar manner to Australian bass.

Diet
Omnivorous, although primarily a carnovore feeding on other fish, jungle perch have been know to eat such diverse foods as crustaceans and figs.

On the table
Not usually taken for the table.

In the aquarium
Smaller jungle perch make interesting aquarium subjects, but due to new restricions in Queensland they may hard to obtain.