Conservation Status
Vulnerable.  Locally abundant, but known only from a very limited geographical area.  Listed as vulnerable on the IUCN Red List.

Habitat
Unlike Southern Pygmy Perch, this species is most common in habitats with high water velocities.  Can be found in fresh or slightly brackish waters with dense aquatic vegetation.   Usually found over gravel substrates, cobble or boulders in areas without siltation.  However, in Ewens Ponds in South Australia it is associated with heavy detritus cover. 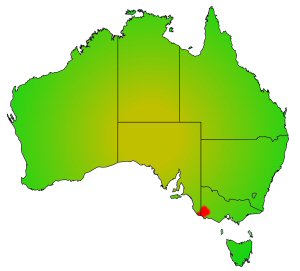 Distribution
Only recently discovered, this species has been found only in the Ewen Ponds system in South Australia and some tributaries of the Gleneg River in south western Victoria.

The presence of trout, redfin and golden perch as major fish predators in the Glenelg River are of concern.

Reproduction
Adults appear to migrate upstream to spawn, thought to be a multiple spawner like the Southern Pygmy Perch.

Diet
Believed to be completely carnivorous, feeding on benthic insect larvae and crustaceans.

In the aquarium
Has great potential as an aquarium species.  Requires well oxygenated water, feed with small shrimps and mosquito larvae.