Habitat
Uses a variety of habitats and may be found in still or moving water which can be in turn either clear or turbid. 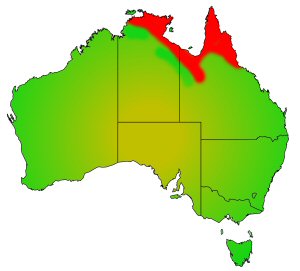 Distribution
East coast of Queensland from about Cape Hillsborough north throughout Cape York and the Gulf of Carpentaria west through Arnhemland to the Daly River System.

Reproduction
Spawning occurs in summer after water levels begin to rise and water temperatures exceed about 25°C.  Schools of up to 50 individuals have been observed spawning as a group in shallow water (less than 500 mm deep).  Sooty Grunters are egg scatterers and the golden 2 mm eggs hatch after about 42 hours at 26°C.

Angling
Enthusiastic takers of lures, Sooty Grunters will respond to a wide variety of lures and flies.  Also a willing taker of unweighted or lightly weighted baits such as yabbies, shrimps, earthworms, insects and prawns.

On the table
Fair to good eating, with a slightly "weedy" flavour that deters some people.

In the aquarium
Excellent in a larger aquarium, Sooty Grunter are hardy and easy to maintain.  They have an enourmous appetite and will take frozen or live food.  If not enough animal food is given, they will eat plant material in the aquarium.  Even small specimens require a lot of room, Sooty Grunter is a large Aquarium fish only.  Very aggressive towards other fish, and should only be kept in its own tank.