Habitat
Tolerates a wide range of habitats, has a preference for still or slow moving waters.  Able to withstand very high salinities well above that of sea water. 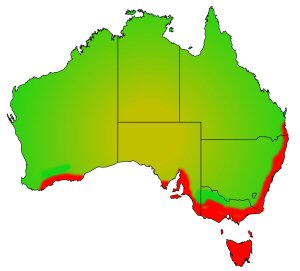 In Australia the common galaxias is found in coastal rivers, lakes and streams at low altitudes from Adelaide in South Australia, through Victoria, Tasmania and the Bass Strait islands, New South Wales and Southern Queensland as well as areas of southern Western Australia.

Also found in New Zealand, Lord Howe Island, the Chatham Islands, and Patagonian South America (Chile and Argentina) as well as the Falkland Islands.  Probably the most widely naturally distributed freshwater fish in the world.

Reproduction
Spawns amongst terrestrial vegetation around river estuaries when under water at high tide.  The eggs remain out of water for two weeks or more until a later group of spring tides.  Most adults die after spawning.  When the eggs are re-inundated they hatch and the larvea, which are about 7 mm long, migrate to sea.  The young spend the Winter there and return to freshwater after about 5 to 6 months.  The returning young fish are around 45-50 mm long, transparent and enter the rivers in huge shoals on the rising tide.  Usually the fish reach maturity and spawn the following Autumn at 1 year of age.  Occasionally females may delay maturity and spawning until the second or even the third year.

Diet
Carnivorous, feeding on a wide variety of small aquatic insects, crutaceans and molluscs as well as terrestrial insects especially chironomid (midge) larvae.  Will take any small animal from the surface, mid water or the bottom.

Angling
Not an angling species.  Forms part of the recreation whitebait catch in Tasmania.

On the table
Not generally used as a food fish in Australia, but is consumed to a limited extent as whitebait.

In the aquarium
An easily kept, active aquarium species.  However, females may become egg-bound during Autumn and may then die.  High temperatures in Summer can also be a problem, but this can be overcome by freezing water in plastic drink bottles and floating them in tha tank during the hot days.