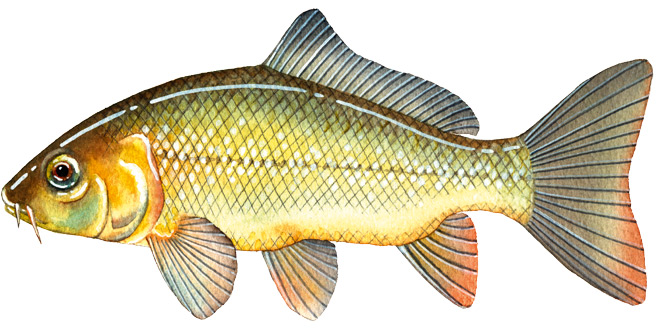 Attempts to acclimate carp since the 1860s and early this century were largely unsuccessful and eventually carp were recognised as an environmental pest and such attempts were banned.  However, illegal stockings of carp (believed to be from Germany) in the 1960s which co-incided with substantial reductions in native fish for unrelated reasons allowed the species to establish itself in the wild.

Since then carp have become the dominant species in many waters and are a declared noxious species in Victoria.  It is illegal to return live carp to any waters in Victoria and any carp caught must be destroyed.  It is also illegal to hold live carp in Victoria, including koi carp, which are kept by some people as ornamental fish.

Often blamed for any environmental damage in systems where they occur, they do in fact cause considerable damage.  Some native species, notably Murray cod, have learned to feed on carp and young carp form an important part of their food supply at certain times of the year.

Almost universally despised in Australia, carp are not generally sought as a food fish.  There have been a number of attempts with limited success to establish commercial uses for the fish.

Carp were recently discovered in Tasmania and caused much alarm, ironically, because of its possible effects on another introduced species, trout.