Habitat
Shows a preference for fast-flowing, clear streams especially tumbling, boulder strewn brooks in the headwaters above forested areas, although it appears to avoid the dark tannin-stained waters found in some forests.  Common down to sea level in southern Tasmania in streams without introduced species.

Appears to be adversely effected by introduced trout: it is at high risk of predation by rainbow trout in lakes, especially in Tasmania, and is displaced by brown trout in streams.  Its predominance in headwater areas, is probably more related the species well know ability to climb obstacles than to any actual preference for the higher waters - trout are not able to navigate many of these barriers.  Nevertheless, Climbing Galaxias are aggressive up-stream migrants and can climb vertical rock faces tens of meters high.  It adheres to damp rock surfaces with its large downward facing pelvic and pectoral fins and moves upward by wriggling "like a lizard". 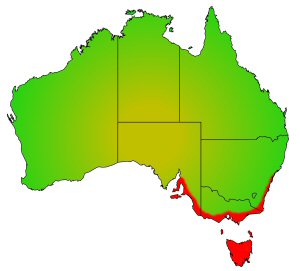 Coastal streams in south-eastern Australia from Adelaide and Kangaroo Island, through coastal Victoria including Wilson's Promontory, Tasmania, Flinders & King Islands and up the New South Wales coast to around Sydney.

Reproduction
Not well known, however, breeding is known to occur in autumn and winter.  Eggs have been found on the forest floor beyond the normal water flow, presumably spawned during floods.  It is believed that the larvae are swept down-stream to the sea (except in land locked populations) where they live for 6 months or so.  During the spring they return to freshwater as juveniles - transparent "whitebait" about 40-40 mm long.  May return to estuaries as part of the large mixed-species shoals but soon adopts a bottom-dwelling lifestyle and migrate upstream to find suitable habitat to grow and feed.

Land locked populations adopt a similar life cycle except the juveniles are pelagic in lakes rather than the sea.

Diet
A generalised invertebrate carnivore it feeds on a wide variety of organisms in its environment.  Takes aquatic and terrestrial insects (terrestrial from the surface), as well as mayfly, caddis larvae and amphipods.

Angling
In the past formed part of the Tasmanian whitebait industry, but recent restrictions on the industry have been aimed a restricting the impact on a number of galaxiid species including Climbing Galaxias.

Not usually a target for angling, however they provide good sport on ultra light tackle in small streams.  The best approach is a small un-weighted earthworm on a very small (about No 14) chemically sharpened hook with the barb crushed.  Simply let out around 2-3 m of line and allow the worm to drift downstream through water chutes between boulders in the stream bed, following the bait with the rod tip.  When the worm has traversed the mini-rapid, simply lift the rod to repeat the process.  Several attempts should be tried before moving on to the next lie.  These guys give a good account of themselves and can be a lot of fun.  Naturally, release any specimens captured in good condition - by the nature of this method of angling it is virtually assured that the fish will be lip-hooked and can be very easily released without harm.

On the table
Not a table fish due to its small size.

In the aquarium
Not often kept in aquaria, the Climbing Galaxias is nevertheless an attractive fish that is easy to maintain.  Due to its ability to climb and jump, the tank should have a carefully designed cover to prevent escape.  Willingly takes earthworms.  Can be an active and engaging species in captivity.