Habitat
Most common in estuarine waters.  Generally prefers more saline water than Australian bass, with which it is often confused, but nevertheless quite often found in locations with very low salinity. 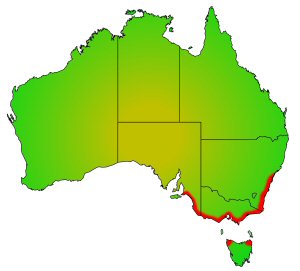 Coastal rivers and lakes from the Richmond River in northern New South Wales through the whole of the Victorian coast as far west as mouth of the Murray River in South Australia as well as the Arthur and Ansons Rivers in Tasmania.  Abundant in most streams in its distribution, especially in southern New South Wales and Victoria.

Reproduction
Spawning is believed to occur in the lower sections of estuaries.  Breeding may commence as early as July to August in New South Wales, but usually occurs much later, into November or December, in Victorian waters, especially in the western regions.

Diet
Estuary perch appear to feed loser to the bottom and have a less varied diet to that of Australian bass.

Angling
Usually overlooked as an angling target, estuary perch are a good fighting fish and is readily taken on artificial lures and baits such as sand worms, prawns and Bass yabbies.

Tends to run "hot and cold" and often seems to move up and down the lower parts of rivers streams with the tide, perhaps maintaining some preferred salinity level.  Can be very abundant at times.

On the table
Very good eating.

In the aquarium
Not really suitable for aquarium use, estuary perch often do not handle well and can be difficult to maintain especially in summer.