Habitat
Often found in shallow water amongst heavy vegetation at the edges of still or slow flowing water in ponds, billabongs, swamps, backwaters and drains.  Often associated with yabbies.  Appears to take shelter in yabby burrows when threatened.

Previousy believed to aestivate within yabby holes.  In areas where gambusia have established significant populations, Dwarf Galaxias are often only found in ephemeral wetlands.  It appeared that G.pusilla's supposed aestivating ability allows it to survive periodic drying up of its habitat whic gambusia could not.  However, it has now been found that dwarf galacias recolonise ephemeral waters from adjacent areas and so G. pusilla is extremely vulnerable to competition from gambusia. 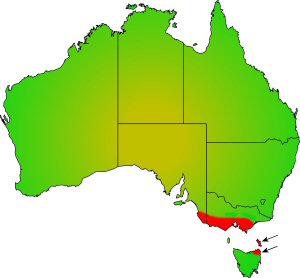 Galaxiella Pusilla has a patchy distribution within its range.  Whilst it may be locally abundant it has suffered greatly from loss of habitat due to drainage of wetlands and other "improvements" as well as incursion by gambusia to which species the Dwarf Galaxias seems particularly vulnerable.

Reproduction
Spawns in late winter to early spring.  Females carry between 150 to 200 eggs of about 0.7mm which expand to around 1.2mm when water hardened.  Females spend perhaps as much as two weeks laying eggs one at a time attended by various males.  No elaborate courtship behavior is noted, the male simply nudges the female's belly.  The eggs are deposited on a suitable surface, the underside of a leaf being particularly favoured.  A female appears to lay only about ten eggs per day.  The larvae hatch within two to three weeks at which time they are around 4.5mm long.  The prominent yolk sac is absorbed within three days and the fry then swim freely at the water's surface.  G.pusilla appears to be an annual species as populations only contain a single age class, with the adults dying after reproduction.  This fish spends its entire life cycle in fresh water

Diet
Feeds mostly on aquatic invertebrates such as copepods, chironomid larvae etc and a variety of small terrestrial arthropods.

Angling
Not an angling target

On the table
Not a food fish

In the aquarium
A very attractive, small species that is active and non-aggressive and is kept easily in an aquarium.  Does particularly well in heavily planted aquaria.  Will spawn in tanks.

Note: due to its protected status in Victoria it may not be kept in captivity there.