Habitat
Most common in deep pools in still or slow-flowing water with some aquatic vegetation on the stream banks. Found in clear or turbid water over mud, sand or gravel substrate. Can survive during periods of low dissolved oxygen such as in stagnant pools during drought by breathing air from the surface every 30 to 60 minutes. When surfacing to empty and re-fill its lungs, the fish makes a sound like that of a small bellows. 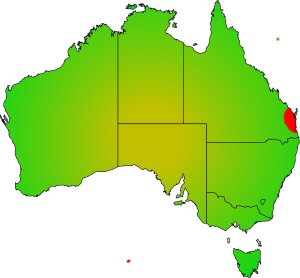 Burnett and Mary River systems, Queensland. Has been introduced into other systems in southeast Queensland such as the Brisbane, Albert, Coomera, and Stanley Rivers as well as Ennoggera Reservoir.

Construction of impoundments in the Burnett system has resulted in significant reduction in available habitat and, more importantly, breeding sites. Lungfish show considerable reluctance to seek out new spawning grounds and if one that has been used in the past becomes unsuitable due to exposure caused by river regulation (for example), the fish simply re-absorb the eggs, and milt and return again the following year. If conditions have not improved, they may continue to do this year after year until they are too old to breed.

History
The Australian lungfish belongs to a very ancient group, Sarcopterygii (fleshy finned fishes). Fossil members of this group have been dated at over 400 million years with the lungfishes first appearing about 380 million years ago. The Australian fossil record shows up to seven species.  Fossils identical to N. forsteri found in northern New South Wales have been dated at 100 Million years, during the early Cretaceous Period, making this species a member of the oldest extant vertebrate genus.

It was originally thought that this group of fishes were direct ancestors of amphibians, but now it is recognised that amphibians and lungfishes share a common ancestor. Nevertheless lungfishes evolved early in the history of vertebrates and do provide at least a small window into the distant past.

The Australian lungfish is a very long lived, slow-growing fish. It may attain a length of only 120 mm after two years. One specimen held in the Shedd Aquarium, Chicago, lived for more than 50 years.

Lungfish are easily identified by their long heavy body, large heavy overlapping scales, small eyes and sturdy pectoral and pelvic fins resembling flippers. Colouration is dull brown to olive-green and some specimens have irregular dark blotches on the back especially towards the tail. The belly is whitish although some juvenile animals have a very striking orange-pink belly.

Reproduction
Spawning involves pairs of fish and usually occurs at night between August and December with the peak of activity around late October. Spawning activities have been observed along the edge of streams in about 1 m of water where some aquatic vegetation is present and at water temperatures between 20 to 23°C. The eggs are usually between 3.0 and 6.0 mm in diameter and adhere to aquatic vegetation such as Hydrilla and Valisneria and such like.

During spawning the fish are not easily distracted.  Five spawning behaviours have been observed:

Unlike some other lungfish species, Australian lungfish do not exhibit parental care.

Lungfish eggs stuck to aquatic vegetation have been collected after spawning and each egg is surrounded by a gelatenous coating similar to that of a frog. Subsequent development of the egg and embryo is similar to that of amphibians. The larvae hatch at around 21 days, but hatching may be delayed to as much as 43 days at cooler temperatures.

Newly hatched larvae often move back into the egg shell for up to 10 days. The larvae slowly absorb the yolk sac and begin to feed after 41 to 56 days from hatching. During this period the larvae, which have very thin bodies, are very poor swimmers, and spend long periods of time on their sides on the bottom.

When they begin to feed the larvae become much more active and tend to lie on their bellies rather than on their sides as before. Natural food selection for larvae is unknown, but in captivity they will take newly hatched brine shrimp, daphnia, midge larvae, and tubifex.

There are no dramatic changes in appearance during growth, the juveniles just gradually become more, and more like adults until by around six months of age they essentially resemble adults. Juvenile lungfish begin to breathe air when about 25 mm in length.

Diet
Mostly carnivorous, consuming frogs, tadpoles, small fish, moluscs, freshwater shrimp and earthworms, however, it has been observed to eat some aquatic and terrestrial plant material.

Angling
Totally protected, may not be targeted by anglers.

In the aquarium
Not readily available as an aquarium species. Only one licenced commercial breeder produces this fish for sale (see www.lungfishbreeders.com). All commercially produced fish are micro-chipped and CITES registered, fish may not be taken from the wild. Due to high costs and legal requirement involved in breeding these fish, lungfish are not cheap to purchase, so they are really only suitable for the committed enthusiast. In addition, you may require a licence to hold this species, depending upon local laws.

Nevertheless, the fish are easily kept, well mannered aquarium subjects. However, because these fish are very long lived and can grow to a very large size, if contemplating this species you need to be prepared for the long haul.