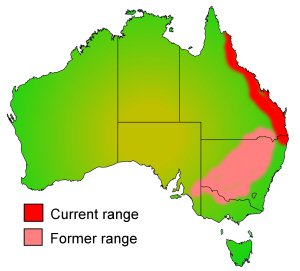 Distribution
Found in coastal Queensland drainiages from the Pascoe River south and originally extensively in the Murray-Darling, now reduced to a patchy distribution in Northern New South Wales and Southern Queensland.  Originally its distribution extended into Northern Victoria where it had been presumed extinct since the 1930's.

Recently re-discovered in the Cardross Lakes (an irrigation drainage basin system) near Mildura in Northern Victoria.  NFA (Victoria) and the Australian Conservation Foundation combined forces to fight to save the fish in this system which was drying up due to changes in irrigation practices.  To date, some success has been achieved with water being supplied to restore water levels for the 1996/97 summer.  The long term survival of this species and the other aquatic faunal assemblage has not yet been assured.

In the Aquarium
Not suitable for use in an aquarium due to its conservation status.