Habitat
Prefering clearer waters than S.leichardti, gulf saratoga is usually found in the upper reaches of the rivers within its distribution, inhabiting both still billabongs and fast flowing streams.  Like S.leichardti, gulf Saratoga are solitary territorial fish. 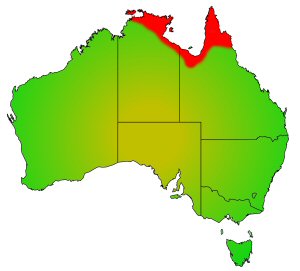 Gulf saratoga have patchy distribution throughout North Queensland and most of the Gulf of Carpentaria drainage system to as far west as the Adelaide River (East of Darwin in the Northern Territory), also the Trans-Fly region in southern Papua New Guinea.

Reproduction
Gulf saratoga are known to be mouth brooders, like S.leichardti, producing between 60 to 100 large eggs, however the details of its breeding behaviour have not been recorded.

Diet
An oportunistic carnivore and mainly a surface and mid water feeder like S.leichardti, gulf saratoga take a wider variety of other fish and crustaceans as well as terrestrial insects etc.

Angling
An excellent sport fishing species, gulf saratoga are similar to S.leichardti as an angling target, especially for lure and fly anglers.  Living in more remote areas than its relative, the gulf saratoga is probably less exposed to angling pressure.  Queensland minimum size 50 cm, combined possession limit for saratoga and gulf saratoga is one fish.  However, NFA still recomends the use of catch and release for this species.

On the table
Not usually taken for the table.

In the aquarium
An attractive and majestic aquarium species, less easily startled than S.leichardti, gulf saratoga are relatively easy to keep in an aquarium.  The tank should have a heavy cover to prevent the fish jumping out, but this is much less likely than with S.leichardti.  A solitary, agressive and territorial species that is not suitable for use in a community tank.