Habitat
Prefers still or slow flowing water. Usually found in tannin stained slightly acidic water in such areas as swamps, streams and dune lakes. Often found sheltering among or near emergent vegetation or amongst the roots of riparian vegetation that protrudes below undercut stream banks. It especially occurs in lowland heaths dominated by Bansksia species. 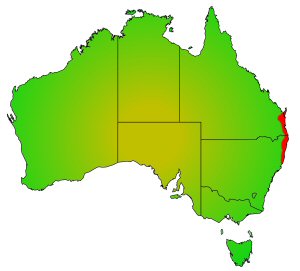 Nannoperca oxleyana has a fragmenteed and restristed range from Tin Can Bay, north of Noosa in southern Queensland, to the Richmond River in northern New South Wales although originally probably as far south as the Manning River at Taree, also found on Fraser, Moreton and Stradbroke islands.  Its prevalance within this range has been dramatically reduced to a number of isolated, small populations in remaining suitable habitats. These populations are separated by large distances over land and there are consequently limited possibilities for breeding between the populations.

History
The Oxleyan pygmy perch has not been well studied and little has been published about the fish. Aquatic vegetation seems necessary for the survival os the species since it is used for shelter from predators, foraging and the creation of territories by males, as well as for spawning.

Adult Oxleyan pygmy perchl forage amongst aquatic plants in ones or twos, while juveniles tend to occur in groups of three or four. The species mature after only about four to five months.

Reproduction
The breeding season extends from spring to autumn, but mostly in October to December. Spawning triggers is thought to be increased water temperatures above 20°C. The aghesive eggs are laid amongst underwater vegetation, thus protecting them from water currents and predation. The fry hatch in about three or four days and have absorbed the yolk sac and begune to feed after another two.

Angling
Not an angling fish.