Recent historical research has uncovered a considerable body of evidence that, at least in the past, trout cod may well have greatly exceed this size with credible claims of trout cod in the region of 30 Kg and even larger.

In February 2019 the species was upgraded from endangered to vulnerable on the IUCN Redlist in recognition of the results of ongoing work on the species recovery.

Habitat
Large trout cod typically inhabit deep holes, smaller fish beneath and amongst boulders and other cover.  Often found in fast flowing water over bedrock, boulder and sand substrates and amongst heavy cover in faster water than for Murray cod.  Highly territorial and aggressive towards other fish including its own species. 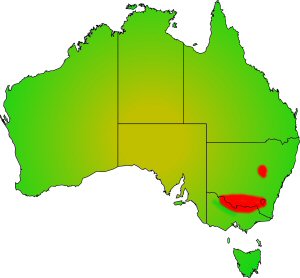 Once relatively common throughout a large part of the Murray-Darling system, now reduced to two breeding populations in the wild - the Murray River from Yarrawonga downstream to the Barmah Forest and a translocated population in Seven Creeks near Euroa in Victoria.  Being re-stocked as part of the trout cod recovery plan with fish bred by New South Wales and Victorian Fisheries and by Native Fish Australia (Victoria).

Although originally there was considerable overlap in range between the two species, trout cod generally prefer cooler and faster water than Murray cod.  Recent historical research into the past range of trout cod has shown that although there were very rare captures of trout cod as far down stream as Mildura, these were exceptional and by the early decades of the twentieth century this fish was no longer found so far downstream. Moving upstream to Swan Hill, trout cod were becoming more common and in waters upstream of Albury/Wodonga trout cod became the dominant species in foothill and upland waters.  Historical records from anglers and other sources, backed up by photographic and documentary evidence, is being collated as this is written in mid 2007.

During the latter part of the twentieth century, some researchers formed the opinion that trout cod were essentially some form of aberrant lowland species.  This appears to have been based on the fact that the extant museum specimens predominantly came from lowland areas and because of the opinion that most trout cod reports in upland waters, especially those of anglers, were of misidentified Murray cod.  The matter was confused by the fact that Murray cod have indeed been found at considerable elevation.  The debate has raged back and forth, but the picture is now becoming clear that the angler reports were in fact correct - there is simply too much corroboration of evidence from different sources for any other conclusion to be drawn - trout cod's primary range was in the foothills and upland areas of south east Australia, although, due to their wide tolerances in common with many Australian native fish, they were present in a wide area ranging from quite low in the lowland plains all the way up to even montane/headwater streams at times.

History
Murray cod had long been recognised as consisting of two distinct groups by anglers and commercial fishermen since at least the mid nineteenth century.  In fact the smaller "blue nosed cod" were considered to be of inferior eating quality and attracted a lower price in the market.  It is interesting to speculate that this quality issue may have been a result of trout cod's exceptional tenacity when captured - it is unlikely that a trout cod in a drum net (the net of choice for the commercial fishermen) would just sit there quietly like a Murray cod is likely to do.  The trout cod's most likely response would be continuous frenetic activity in an attempt to escape.  The upshot of this is that the fish would build up high levels of lactic acid in the muscle tissues, thus adversely affecting it's eating and keeping quality.

Trout cod were formally recognised as a separate species in the mid 1970s. (See The Differences between trout cod and Murray cod) When the species was recognised it was discovered that the original specimen that had been used to describe Murray cod (Cuvier, 1829) was, in fact, a trout cod. Consequently the original scientific name for Murray cod Maccullochella macquariensis was transferred to the new species and a new scientific name Maccullochella peeli was introduced for Murray cod.  Murray cod have subsequently been further subdivided into three distinct subspecies.

Reproduction
Little is known about reproduction in the wild, presumed to be similar to Murray cod.  Unlike Murray cod, trout cod will not spawn in earthen ponds in captivity.  Believed to spawn about two weeks earlier than Murray cod when present in the same waters.  Has been known to hybridise with Murray cod in the wild but this is very unusual.  The progeny of such a cross are of unknown reproductive viability.

Diet
(Top Predator)  As for Murray cod with adjustments made for the relative size of the fish, although trout cod are more active and aggressive feeders especially at lower temperatures.

To protect the last remaining wild breeding populations, all angling in Seven Creeks is prohibited in the section where the species occurs (check the current regulations if intending to fish in this system) and during the whole of the months of September, October and November (check dates before fishing) all angling is banned in the Murray River from Yarrawonga downstream to Cobram. It has been proposed that this closure of the Murray River be extended further downstream to Tocumwal, a move which would be supported by NFA.

Make sure that you can tell the difference between trout cod and Murray cod, as the two species are closely related and can easily be mistaken by the casual observer.

The penalties for being found in possession of a trout cod are severe.

Trout cod are often caught accidentally when fishing for Murray cod and other species in waters where trout cod occur and in this case anglers are advised (and are also required by law) to release the fish in as good a condition as possible.  Always employ correct catch and release procedures when fishing in waters where trout cod are present (for example the Murray River between Yarrawonga and the Barmah Forest) as well as at any time when releasing a fish.

Trout cod have tremendous potential as a future angling species due to its very aggressive nature and willingness to take lures and fly, including dry fly (and just about everything else for that matter).  NFA would support limited angling for trout cod once the species future has been secured in circumstance where this would not put any pressure on the wild populations. For example, perhaps it might eventually be possible to establish a catch and release only fishery in a water reservoir using hatchery bred fish.