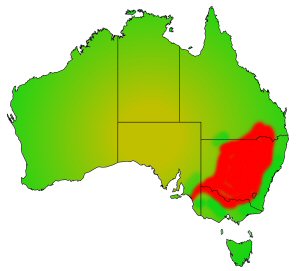 Distribution
Once very common throughout the warmer waters of the Murray-Darling, silver perch river numbers have dropped alarmingly in recent years.  No re-stocking program has yet been mooted for the river populations and this has been blamed on lack of demand from the "client group", ie anglers.  This is hardly surprising, since the majority of silver perch anglers fish impoundments, where they are plentiful.

Bred extensively in the commercial sector and a popular warm water aquaculture and farm dam species, silver perch are stocked heavily in impoundments, especially in New South Wales and Queensland where it has gained a popular reputation for "disappearing" after a few years.  However, this is believed to be due primarily to the change of diet experienced by larger silver perch.  Despite their reputation, silvers are caught in large numbers by bank anglers using bait, in many of these impoundments.

Reproduction
Long spawning migration upstream in spring to areas behind peaks of floods.  Spawning takes place close to sunrise in spawning schools of 50 to 70 individuals in flooded backwaters of low gradient streams.  Little or no spawning in years with no floods, eg drought years.

Angling
An excellent fighting fish, silver perch are a popular target for many anglers.  Because of their small mouth, smaller baits and lures a best.  The best bait by far is freshwater shrimp, followed by scrubworms.

Anecdotally, one effective method when boat fishing for silvers in rivers is to find a tree fallen in the river with most of its smaller branches and twigs intact and to drive the boat into it a few times to shake up the shrimp.  This reputedly stirs up the silvers something ferocious for about 15-20 mins during which time a shrimp on the hook is a good bet for a silver.

Different size and bag limits apply in the various States.

On the table
Smaller fish (less than about 1.5 Kg) are good eating.  Larger fish are better if skinned and can have a "weedy" taste.

On the web
Silver perch