Taxonomy
Following a review in 2014, the three species in the G. olidus species complex have been expanded to fifteen:

Habitat
Usually in clear flowing streams with a sand, gravel or boulder bottom.  Will form loose schools in pools and runs, solitary amongst rocks or at the stream edge.  Has been found over a mud bottom in quieter reaches.

Can tolerate water temperatures up to 32°C and has been found in small ponds and streams surrounded by thick snow on the Bogong High Plains and Mount Buffallo in Victoria. 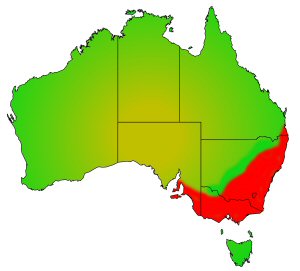 Has been recorded from sea level up about 1800 m.  Can be locally abundant in patches across its wide range, especially in areas with little or no trout.

In both Victoria and New South Wales, trout appear to have fragmented the range of G. olidus into isolated populations.  In many areas trout occupy the main body of the stream and mountain galaxias are confined to places inaccessible to trout such as above waterfalls or other barriers.

Since G. olidus has similar habitat and food requirements to small trout and feeds in a similar manner, competition for food and living space is bound to occur.  However, predation by trout also occurs and is considered to be the main reason for the extinction of this species in areas where trout have been introduced.

Reproduction
Spawning occurs mainly in spring but may continue through summer and even into autumn in alpine populations.  Fertilised eggs are relatively large at around 2.3 mm with females producing between about 50 and 350 eggs.  Incubation takes around 3 weeks at 15°C and the newly hatched larvae are about 9-10 mm long.  Growth is rapid and within 8 weeks the juvenile fish may attain a length of 31 mm.  There is no downstream migration to the sea and juveniles may be found with adults in loose shoals.

In the aquarium
Mountain galaxias are robust and easily kept aquarium fish.  A shoal of these fish in an aquarium is particularly attractive.  They will take a variety of foods such as mosquito larvae, grasshoppers, midges, earthworms and moths.  They will jump to take insects hovering over the water and will also readily take fruitfly larvae, chopped liver, lean raw minced steak, frozen brine shrimp, powdered pellets and flake food.

Larger adults will chase small juveniles for a short time but generally there is little aggression within the group.  However, it is recorded that G. olidus attacked and killed a Cox's Gudgeon Gobimorphus coxii which was introduced to an established tank population.

Steady illumination is important as sudden changes in lighting appear to panic smaller G. olidus individuals.  In a small tank or pond this species can withstand water temperatures up to 32° with substantial daily variation.