Habitat
Strictly a freshwater species although most other members of its group are marine.  Found in dense vegetation in streams, ponds and reservoirs. 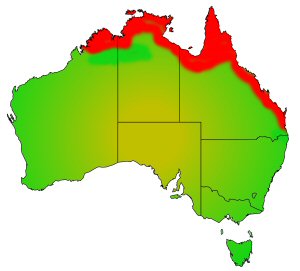 Distribution
Coastal drainages in in northern Australia from northern Western Australia, across the Northern Territory and Queensland to northern New South Wales.  Also found in the southern rivers of Papua New Guinea.

Reproduction
Spawns in summer at water temperatures of about 22°C.  The eggs are about 3 mm across and laid in a packet surrounded by a thin membrane.  The male incubates the eggs in his mouth.

Diet
Carnivorous, eats a variety of small fish and invertebrates.

Angling
Not generally considered an angling species due to its size.

On the table
Quite good eating despite its usually small size.

In the aquarium
Difficult to keep in an aquarium.  Prone to fungal infection after handling.  Tolerates water temperatures up to 38°C and pH levels from 4.5 to 8.