Restricted.  Considered rare in much of its original range, although still present in large numbers in many locations.

Variety of environments, but most frequently occurs in warm, turbid, sluggish inland waters and associated backwaters and billabongs.  A tolerant fish able to withstand water temperatures of 4 to 37°C, and salinities up to 33,000 parts per million (almost that of sea-water). 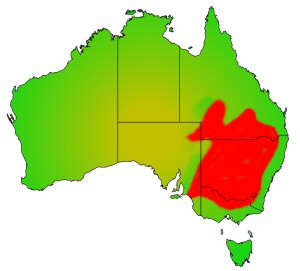 The entire Murray-Darling basin except in the headwaters, as well as the Barcoo and Lake Eyre drainages.  Widely bred commercially and stocked in substantial numbers in many Australian dams.  A popular species for aquaculture and an excellent farm dam species.

Spawning is reported to occur at night from spring to summer when water temperatures are between 23 and 26°C.  Spawning appears to be triggered by increased daylight and rising water levels.  Will not spawn unless Yabbies are part of the diet.  Adult fish will move very considerable distances (up to 1000 Km) upstream to spawn if possible.  Migration not essential to spawning.  Does not usually spawn in dams.

Widely bred commercially using hormone injection.  A typical spawning from a mature female may produce as much as 500,000 eggs.

Carnivorous, eating mainly Yabbies and shrimps, insects, molluscs and small fish.  Feeding behaviour varies, some individuals remain in shaded areas or amongst cover to take prey as it passes, whilst others move slowly over weed beds etc. to feed.

An excellent angling species.  A vigorous taker of baits, especially shrimp, yabbies and scrub worms, not usually caught on bardi grubs.  Also enthusiastically takes lures, cast or trolled.  Bait and lure sizes smaller than those generally used for Murray cod, but many a golden perch has been caught on a large lure or bait intended for a cod.

Probably the single most effective bait is a bunch of three or four live freshwater shrimps followed by small to medium sized yabbies.  A live Yabby with a ball sinker running right to the hook under the tail is very effective bobbed near prominent snags in the river.

Yellowbelly can often be taken on the edge of weed beds or adjacent to submerged structure.  Sometimes, simply continuing to cast lures into a likely looking place for quite a while can eventually provoke a strike from an unseen passive fish.  This is apparently an aggression response and can produce sizable fish.

Golden perch have been known to take fly, but use heavy gear, an 8 or 10 weight outfit is not over done.

They can hit very hard at times and fights well.  A very strong fish.

When handling golden perch, be very careful around the operculum (gill plate) as they have a couple of razor sharp plates along the edge which can easily cut your finger to the bone. Never put your fingers into the gills of a golden perch. Like most Australian freshwater angling species has spines in the front part of the dorsal fin, so look out for them too!

Excellent eating, especially when between 1 and 2 Kg.  Larger fish carry a fair amount of fat, but this is quite visible in bands along the lateral line and the dorsal area and can be easily removed either prior to cooking or after.

Responds well to simple cooking methods, dipping a fillet in flour and then gently pan frying is a good method as is baking whole a smaller fish.

Occasionally available through the aquarium trade as juvenile fish, golden perch make excellent aquarium fish when kept alone.  Not at all suitable for a community tank as like Murray cod, golden perch are very aggressive towards other fish. Best kept in larger aquaria up to 4'x2'x2'.  Usually does very well and often becomes quite interactive with people in front of the tank.

Does best when fed live food such as smaller yabbies, freshwater shrimp, small fish and scrub worms, but can be trained to take strips of fish fillets.  Individuals at times can be very enthusiastic feeders and can grow remarkably quickly in captivity.  If starting off a juvenile in a smaller tank, be prepared to transfer the fish to a larger tank when needed.  Also check water quality regularly if you have an active feeder.