Habitat
Believed to be a schooling fish, may be found in a great variety of locations due to its wide physio-chemical tolerances.  Spangled perch are known to inhabit forest streams, bore drains, small ponds, isolated billabongs and large, often turbid still or slowly flowing waters.  This fish can tolerate water temperatures from 5° to 44°C, salinities ranging from pure fresh water to seawater and pH from 4.0 to 8.6!

Although there have been no reports of direct observation there is persistent indirect evidence that this species may aestivate (survive in bottom mud or damp leaf litter) when waters dry up.  Often this species is found in large numbers only a few days after rain in locations that were dry just prior to the rain and which have no connection with permanent water.  Unfortunately, no conclusive studies have been undertaken to determine whether this fish has this ability. 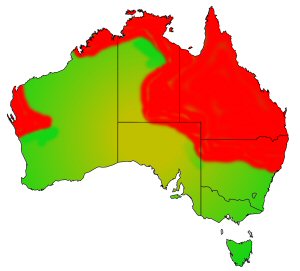 Distribution
Very widely distibuted throughout the northern part of the Australian continent, L. unicolor is one of Australia's most widely distributed freshwater fish.  In Western Australia it is found in most west-flowing streams north of the Murchison River as well as in isolated desert systems as far inland as Cundeelee.

It is found in most coastal and inland systems in the Northern Territory and Queensland as well as south down the eastern seaboard as far as the Hunter River in New South Wales.  In addition it is present inland in the Bulloo River and Lake Eyre drainages and occurs extensively in the Murray-Darling system north of Condoblin in New South Wales.

Reproduction
Spawning takes place from November (following the onset of the Monsoon) into summer.  Prior to spawning this fish will often migrate upstream at dusk or at night.  Has often been observed attempting to swim up spillways of overflowing dams during this period.

Many thousands of tiny eggs around 0.75mm are scattered over the bottom, usually at night and often in shallow areas with a soft bottom.  Incubation takes about 2 days and the larvae are actively feeding within another 2 days.  Larval development is complete within 24 days of spawning.

One of the very few teraponids that will breed in dams where it will move to shallow areas to spawn.  Has some potential as an aquaculture subject.  Matures at a small size, around 78mm for females and 58mm for males.

Not sexually dimorphic except during the breeding season when the sexes can be distinguished by the shape and size of the urinogenital pappilla.  In females the papilla are large and very obvious whereas in males they are smaller and less bulbous.

Angling
Not often fished for because of its often small size, spangled perch will nevertheless bite eagerly on a wide variety of baits and fight well.  May be a good target for fly fishing.  In areas where other species are uncommon or absent, larger specimens are often retained for the table.  If numbers are low, the fish may grow to an unusually large size.

On the table
Excellent flavour but has numerous bones, especially in smaller specimens.

In the aquarium
An attractive and active species that is easy to maintain in an aquarium.  However, it is easily alarmed and may jump out of the tank, so a well fitting lid is a must.  Very aggressive to all other fish, so it is not a candidate for a community tank.