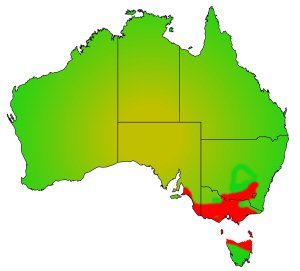 Distribution
Victoria, south eastern South Australia, southern areas of the Murray-Darling basin in New South Wales.  Fragmentation of habitat and population is becoming a major concern especially in the Murray-Darling system to the extent that recolonisation of areas where individual populations are lost is being hindered.

Reproduction
Spawns multiple times from September to January, when water temperatures are above 16°C  During breeding males are territorial.  Female produces between 100 and 1,000 transparent round and non-adhesive eggs which are scattered over plants or the substrate.  When fully hydrated, fertilised eggs are 1.2.1.4 mm in diameter.  Eggs hatch in 2 to 4 days producing larvae about 3 to 4 mm long.

On the table
Not a food fish (for humans).

In the aquarium
An attractive aquarium fish which shows quite spectacular colours when in breeding condition.  Should be kept in a well planted aquarium and will spawn in captivity.  Best fed small live invertebrates.