Habitat
A bottom dwelling species.  Found in a wide variety of both freshwater and estuarine habitats, in still and flowing water, aspecially amongst thick cover. 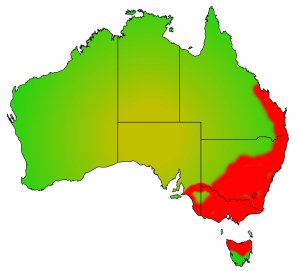 Occurs throughout the Murray-Darling Basin and in coastal drainages in Victoria, Northern Tasmania, New South Wales and Queensland as far North as the Mackenzie River.

Reproduction
Breeds in Spring and Summer in inland waters, extending through to Winter in Northern coastal waters.  Female lays up to 900 elongate eggs which are attached to a solid object like a small rock in a single mass.  The eggs are around 2 mm long and less than 1 mm wide and are pointed at one end, blunt at the other.  The eggs hatch 4 to 6 days after laying and the larvae absorb the yolk sac in around 3 days.  The newly hatched larvae are about 3.8 mm inlength.

In the aquarium
Does well in an aquarium, but will prey on other fish and smaller members of its own species.  Has been bred in captivity.