Habitat
Slow rivers with deep holes, lakes.  Bottom to mid water dwellers, not at all territorial. 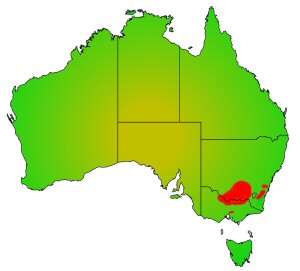 Western Population: Originally widespread throughout the upper, cooler waters of the Murray-Darling.  Now the only substantial, self-sustaining populations occur in the banked up waters of the man made Lake Dartmouth on the Mitta Mitta River in North Eastern Victoria and a population translocated to the Yarra River near Melbourne in the 1920s.  Small remnant (and occasionally breeding) populations occur throughout its original range.

Ex-brood fish from the Snob's Creek Fisheries Research Station (originally captured from Lake Dartmouth) have been liberated in Lake Eildon (also man made) in an attempt to re-establish the species in the lake and the rivers above it.  This attempt has been accompanied by a total ban on the taking of Macquarie perch from the lake and its tributaries.  Anecdotal evidence on the effectiveness of this ban has been mixed.  It is expected that the success of this experiment will be determined in the next few years.

Eastern Population: Two separate populations of a dwarf form of the Macquarie Perch exist in New South Wales, east of the Great Dividing Range in the Shoalhaven and Hawksebury River systems.  The Macquarie Perch in these two river systems are reportedly fairly abundant, including in the associated impoundments.  Generally, the Macquarie Perch are found upstream of areas inhabited by Australian Bass.  These eastern fish are substantially smaller than their western brethren, and are usually covered with blotchy markings with a maximum size around 180 mm.  It is considered likely that these two populations may comprise one or two sub-species of Macquarie Perch separate from the western population.  As a result of this possibility, controls on the translocation of Macquarie Perch especially in New South Wales have been tightened.

In addition, there is a population in the Mongarlowe River, a tributary of the Shoalhaven, which appears to have been translocated from the western population, but the literature is not clear about this.  If this is so, then it must present a threat to the gene pool for the eastern sub-species in this system.

Reproduction
Spawning occurs between October and November in shallow upland streams.  Fish in lakes often make an upstream migration to spawn.  Prior to this migration, large aggregations of fish often occur in the upper reaches of lakes, making Macquarie perch very vulnerable to unscrupulous anglers (hence seasonal closures to angling for this species in lakes at this time).  Migration may not be necessary in stream populations.  Spawning occurs amongst stones and gravel in riffle areas.  Females produce up to 32,000 eggs per Kg of fish.

Being bred for re-stocking by Snob's Creek.  NFA (Victoria) have also bred the species using brood stock from the Yarra River population.

Angling
Totally protected in New South Wales, the taking or possession of Macquarie perch is banned.

A zero bag-limit for Macquarie Perch applies to all waters in Victoria except Lake Dartmouth, the Yarra River and Upper Coliban Reservoir and their tributaries; a closed season applies for Macquarie perch in all Victorian waters from 1st September to 31 December.

A good hard fighter on light tackle, Macquarie perch are popular angling targets in Lake Dartmouth and the Yarra River around suburban Warrandyte.  Many anglers for "Maccas" employ catch and release, which NFA strongly encourages.

Best bait is scrub worms on a running sinker rig, but watch for the bite as they have a soft, tentative approach.  Some anglers have been experimenting with dry fly with a degree of success, wet fly has always been an option.  Macquarie perch are reckoned to outfight rainbow trout by a factor of 50%, weight for weight.

In the Aquarium
Macquarie Perch adapt rapidly and well to captivity.  They make attractive, peaceful and engaging aquarium specimens and are easy to keep.  Can be kept in schools of up to a dozen or more fish, depending on aquarium size, but two or three is more common.  Will feed readily on earthworms, small yabbies and freshwater shrimp, can be trained onto fish strips.  Captive Macquarie Perch often become very interactive and can often be trained to hand feeding.