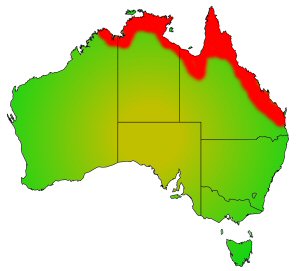 Distribution
Widespread from the Fitzroy River in Queensland North throughout Cape York, the Gulf of Carpentaria and West to the Ord River system. Also recorded in both Northern and Southern New Guinea.

Reproduction
Spawning occurs between October and February.  Female lays a roundish egg sheet, of up to 70,000 adhesive eggs.  This is frequently on the underside of an overhanging rock ledge, under roots or on the roof of a hollow submerged log, usually in a shady location.  The straw coloured eggs, which look like shiny velvet, are guarded and aerated by the male until after the eggs hatch in 5 to 7 days.

Diet
A sluggish bottom dwelling carnivore, feeds on other fish, insects and crustaceans.

Angling
A popular angling species, although it offers little in the way of sport.

On the table
Excellent eating.

In the aquarium
A hardy fish in the aquarium it tolerates capture, handling and transport well.  Juvenile fish will adapt particularly well in a short period of time.  Generally quiet during the day it will take live food such as other fish, shrimps etc at night.  Will also take frozen prawns and pieces of squid.  Will eventually become quite tame and responsive.