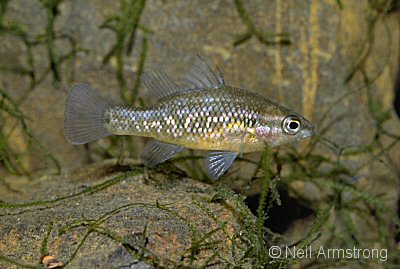 Habitat
Coastal streams. lakes, ponds and swamps.  Often found in shallow pools around the vegetated edge.  Prefers clear water both fresh and brackish amongst stones or submerged debris.  Can withstand water temperatures between 2° and 32°C. 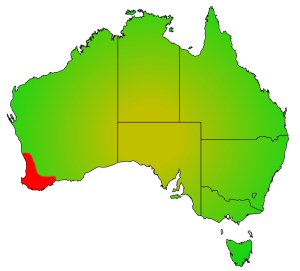 Reproduction
This species has an extended breeding season from July to February.  During this period females develop a bluish tinge on their upper sides while males develop black fins - except for the pectorals which remain clear - other dark markings become more pronounced and the sides attain an orange colour.

Pre-spawning behavior consists of the male moving in tight circles directly in front of the female, with fins held erect and rapid vibration of the body.  Larger males in group situations become more aggressive towards their rivals for a few days prior to spawning.

Actual spawning is very swift.  Typically, during the mid to late morning several males will drive a selected female towards the surface which will, after a few seconds of frenetic activity expel a single demersal egg of about 1.2 mm in diameter.  This procedure is repeated at intervals of around 10 to 15 minutes for approximately 2 hours.

The adhesive eggs sink to the bottom and hatch in approximately 3 days at which time the larvae are only around 3 mm long. Newly hatched larvae are poorly developed with barely detectable eyes, no mouth or vent and practically no colouration.  Within 28 days larval development has been completed and the young fish are around 20 mm in length.

Diet
Carnivorous, mainly feeding on caddisfly larvae but other insects are also taken from the water surface.

Angling
Not suitable for angling due to its small size.

In the aquarium
Like other species in this group, Western Pygmy Perch make suitable aquarium specimens.  They are a hardy and active aquarium species.  May be fed daphnia, mosquito larvae, brine shrimp and other small live food.  Will also take chopped earthworms.