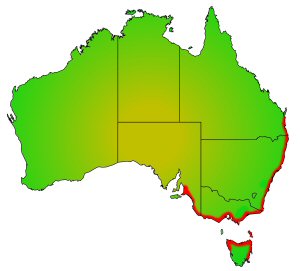 Distribution
Estuaries and lower coastal streams of northern Tasmania and the south eastern part of the Australian mainland from eastern South Australia, through Victoria and New South Wales to the Queensland border.

In the aquarium
An unusual aquarium fish, does best on live food and when provided with a fine sand or silt substrate.