Habitat
Small, shallow, gravel bottomed streams in mountainous areas, not yet colonised by trout. G. fuscus occupies an identical position in the stream ecology to small trout and is not found in waters that contain this introduced species.  Trout directly compete with this species for living space and food.

Prior to work by Victorian fisheries to construct barriers to upstream migration of trout (into waters inhabited with fuscus), surveys showed that the streams could be divided into three distinct zones.  At the downstream end the streams held trout and no G. fuscus.  At the upstream ends there were sections with fuscus and no trout.  Between these two extremes was an "interface zone" where, as you moved higher in the stream to areas where less and less trout had so far penetrated, there were progressively more fuscus.  Examination of the gut contents of trout from this zone found that G. fuscus were being heavily predated.  Clearly, as the trout were migrating into these areas, they were exterminating the galaxias. 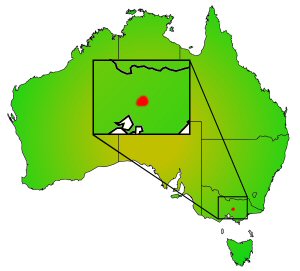 Galaxias fuscus Is found only in a few streams high in the Goulburn River catchment, in mountainous terrain on the northern side of the Great Dividing Range around 75 Km northeast of Melbourne.

Reproduction
Not known, assumed to be similar to inland populations of Galaxias olidus of which species complex G. fuscus is one of 15 members.

Diet
Feeds in a similar manner to trout on a wide range of aquatic invertebrates, predominantly insects but also molluscs, crustaceans and annelids as well as terrestrial insects from the water surface.  Larger fish take proportionately more terrestrial insects.

In the aquarium
Would probably make an easily kept aquarium fish, like G. olidus, but is not available from the aquarium trade and, due to its endangered status, capture from the wild is not an option.  Perhaps one day, if the fish is able to make a comeback, this attractive fish might become available to aquarists.